Difference between revisions of "Description, representation and implementation of a model"

From Popix
Jump to navigation Jump to search

A "model" can be implemented in the real world if it can be programmed using software. To do this, we need a language that can be understood by the software. Before even arriving at this point, it is important to be very clear and systematic about what a model is and how we want to use it.

It is fundamental to distinguish between the description, representation and implementation of a model. Each of these three concepts uses a specific language.

The representation of a model is not unique. The choice of the representation should be driven by the tasks to be executed: if the model is only used to perform computations, a system of equations contains all the information required. If properties of the model need to be tested (linearity, homoscedasticity, etc.), then they need to be represented via explicit definitions.

In the context of mixed-effects models, models that we want to implement can be decomposed into two components: the structural model and the statistical model. Both components have to be described, represented and implemented with precision.

Description, representation and implementation of the structural model

Let us now look in more detail at these three things.

Description of the structural model

The first step consists in describing a model with high precision, using terminology and vocabulary well-adapted to the application. For instance, let us consider a PK model that describes drug concentration as a function of time. We can describe the model with the sentence:

Representation of the structural model

This PK model can by represented by a diagram like the one shown the the following figure. Such diagrams offer both a descriptive and explicit representation (because the properties of the PK model are clearly shown). 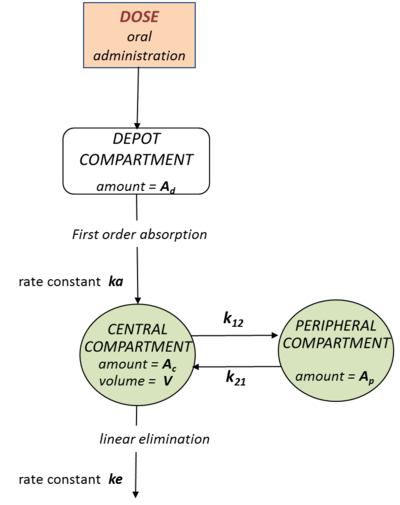 Alternatively, a mathematical representation can be used to translate the description of the model into a system of equations:

This representation allows us to calculate the amount of drug in each compartment at any point of time. On the other hand, this description of the model is implicit: even if a modeler is able to recognize the model described by the equations, i.e., to identify the processes of absorption, distribution and elimination, these are not explicitly represented like in the diagram.

Implementation of the structural model

The $\mlxtran$ language allows us to implement the model represented in the previous diagram using a simple script and a system of macros:

As you can see, there is a one-to-one mapping between the diagram and the code: each element of the diagram (and therefore of the model) is implemented as a macro.

Alternatively, implementation of the model using the mathematical representation requires entering the system of equations into $\mlxtran$. The syntax used should be as close as possible to the original mathematical language in order make development simple and the code easy to parse. Here is the $\mlxtran$ syntax in this case:

Which representation for which task?

It is fundamental to have the possibility of using several representations, and therefore several implementations, depending on the task at hand. One reason is that each kind of implementation has its pros and cons.

The use of equations has the big advantage of being able to represent any complex model. This is not possible when using macros, which are fixed in number by default. For instance, the PK macros in $\mlxtran$ allow us to code linear and non-linear (Michaelis-Menten) elimination, but no macro exists that can combine the two types of elimination. In contrast, such processes can be easily input using equations:

In a similar vein, models that are well-defined mathematically may be horribly complex to implement using equations, but easy using macros. This is true for instance for dynamical systems with source terms such as PK models with repeated oral doses and zero-order absorption. In that example, the absorption rate is a piecewise constant function. It is not easy to code this model using equations, and not worth it when we can quickly use the $\mlxtran$ macro oral(Tk0), which completely characterizes the model for any dose design. The C++ code generated from an $\mlxtran$ script that uses this macro is the same as the one (that would be) generated by a script using a system of equations.

Description, representation and implementation of the statistical model

Description of the statistical model

In this example we want to describe the distribution of the volume in the population, using weight as a covariate. The first step consists of describing with extreme precision the statistical model that we want to use:

Representation of the statistical model

Here, $\omega$ is the standard deviation of the log-volume, $\Vpop$ is a reference value of volume in the population for a reference individual of 70kg and $\Vpop (w_i/70)^\beta$ the predicted volume for an individual with weight $w_i$.

Implementation of the statistical model

The implementation of such models with $\mlxtran$ allows the direct usage of the same definitions and equations with a language very close to the mathematical one. The model in (1) can be implemented in the following way:

The model in (2) can be implemented this way:

Note that the linearity of the model is information that is explicitly entered.

Which representation for which task?

Representations (1), (2) and (3) provide three different mathematical representations of the same probabilistic model. This means that when any of them are written in text or on a slide, anyone with some basic knowledge in statistics and mathematics will be able to derive the same information from any of the representations.

However, if we want to use the model to perform tasks using specific software, the information passed to the software needs to be of a form that the software can understand with respect to each given task. It is not always true that any representation paired with any implementation can be used to perform any task. Let us illustrate this on our example for three basic tasks: simulation, likelihood computation and covariate model assessment.

Simulation. If we assume that the software we use is able to simulate normal random variables with any given mean and standard deviation, then any representation of the model can be used for simulation:

In summary, what is required for simulation is the capacity to express the variable to be simulated as a function of some random variable that can be directly simulated by the software. In conclusion, any of the three $\mlxtran$ implementations proposed above can be used for simulation.

It is also straightforward to derive the likelihood from the pdf of $\log(V_i)$, which is normally distributed:

Then, the likelihood can be easily computed if the software is able to compute a normal pdf for a given mean and standard deviation.

In our example, only the representations of the model given in (2) and (3) (and therefore versions 2 and 3 of the $\mlxtran$ implementation) can be used for computing the likelihood in closed form. Indeed, both representations explicitly describe the probability distribution of $\log(V_i)$ and provide all the required information. On the other hand, the representation given in (1) does not provide any explicit information about the distribution of $V_i$. Deriving the pdf of $V_i$ from (1) would therefore require an interpreter to "understand" the formula, and a tool that can perform symbolic computation.

Covariate model assessment. Our model hypothesizes a linear relationship between the log-weight and the log-volume. To assess if this is valid or not, we might consider using some visual diagnostic check of the plot of the (predicted or simulated) log-volume against the log-weight, to see whether this linear relationship seems plausible or not. Specific statistical procedures can also be used for testing the linearity hypothesis.

and clearly "see" that the predicted log-volume is a linear function of the log-weight. The issue is that, without a powerful interpreter, this information is not available to the software, so it cannot automatically run these tasks. Therefore, we must explicitly "tell" the software that the model is linear, as can be done with $\mlxtran$.